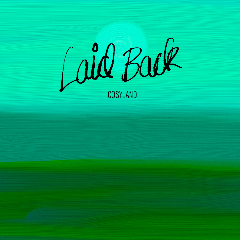 Absolute rarities are unearthed on this Mini Album, taken from original multi-track archive tapes! Recordings at the source of it all were done in 1981 with brand-new equipment such as a Roland TR-808 rhythm box, a SH-101, a Pro-One monophonic synthesizer and a GR-500 guitar controller-and-synth. At the time, this was Science-Fiction.

Recently, that material was copied from analogue to digital and, to stay as true as possible to original intentions, we only added vocals, bass and drumbeats ahead of a final mix.

All recordings were improvised for their own pleasure while experimenting with a new technology, difficult to learn for mere mortals. Besides, they were mere newcomers and beginners in this context, not knowing to later end up defining a new type of trademark Sound. The current release is an archaeology excavation trip, so welcome aboard on a journey to Cosyland!

Laid Back is basically a very artistic band – not necessarily your „average Pop act“. If one has to set a sonic trademark on them, it will have to be their minimal „less is more“ style. The secret of Laid Back has always been to make the difficult easy and the complicated simple.

LAID BACK – THE STORY

Way back in the seventies, Tim Stahl and John Guldberg met in a band called The Starbox Band and soon found out that there was a spezial chemistry between them. They were always the ones left that kept on jamming when band rehearsals ended. After a disaster of a support gig for The Kinks in Copenhagen, where people walked out on them, the band split up. New technology came as a revolution to musicians in the mid-seventies: multi-track tape recorders, rhythm boxes and synthesizers. In a backyard downtown Copenhagen, John had set up a small studio where they began jamming together and do tape recordings. They soon realized that they had created a new sound, a new way of making music.

The debut album “Laid Back” with their first #1 hit “Maybe I’m Crazy” was released in 1981. The next single, “Sunshine Reggae”, was the summer hit of 1982 in Denmark. In 1983 it then went on to be a huge hit in Italy, and after several earlier attempts, that song began climbing up German charts and finally reached #1, selling more than 750,000 singles. Soon, “Sunshine Reggae” went #1 in 22 countries around the World and having so far sold more than 20 million units, compilations included. In the USA, the focus was however on another song, “White Horse”, which became a #1 Dance track and trendsetter for many other artists. When their US record company told them “don’t come, people think you are black”, Tim and John saw it as the biggest acknowledgement a musician could ever get and stayed away…

Today, “White Horse” is known for being a benchmark cornerstone of the electronic music-making in the Eighties, having been sampled over and over again and becoming a true classic. Another outstanding song is “Bakerman”, a big hit in 1990 and known for the skydiver video by the world-known Danish film director Lars von Trier.

In 2001, they composed the music score for the Danish movie “Flyvende Farmor”, for which they received a Robert (the Danish Oscar Award). That same year, they also showed a new artistic side when a successful Laid Back exhibition of paintings took place in Copenhagen. On covers, posters and website, their own artwork is a perfect link to their music. Live, they still improve on a growing reputation for high musical standards. They performed at the 2004 hip Festival on the Isle of Wight, UK, and in 2005 played at the famous open air stage of the Copenhagen Tivoli Gardens and the equally prestigious Roskilde Festival.

In terms of releases, the album “Happy Dreamer” came in 2005, propelling especially its single “Beautiful Day” to great feedback. This also due to a co-operation with noted DJ / Producer Trentemoeller doing a remix of that track.

This further cemented their command of a particular and personal touch able to inspire a new generation of producers and DJs. Among 12” releases, it is worth noting “Cocaine Cool” (also in its remix by Soul Clap) in actually stemming from the days documented on the present Mini Album in unadulterated form. This resurrected track and its release also signalled the start of an own label, and, Laid Back unhindered producing themselves in their Copenhagen studio. So, fast-forwarding to the present, Laid Back have now an own record company, Brother Music!

The time has come for the release of tracks to be regarded of historical significance.

In one way or another since their label’s start, Laid Back came up with apt videoclips to fit their music along with a free rein in using own imaginative graphics and visuals. You can expect them continuing this rather unique stance, already setting them apart from the run-of-the-mill.

Any cookies that may not be particularly necessary for the website to function and is used specifically to collect user personal data via analytics, ads, other embedded contents are termed as non-necessary cookies. It is mandatory to procure user consent prior to running these cookies on your website.