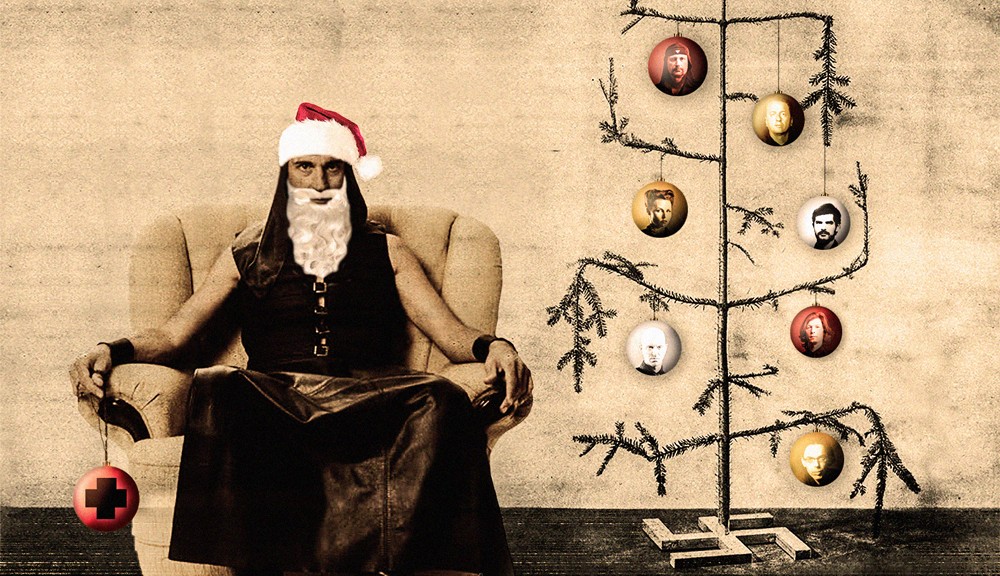 Here is the final word from us (no, we are not splitting) this year and we want to take this chance to undertake a small recapitulation of the year behind us.

It has been a very intense year for Laibach and first of all we need to once again thank everyone who generously contributed to our Indiegogo campaign, helping us to raise funds for the North American (and consequently North Korean!) Tour.

With your help we succeeded in avoiding a complete financial fiasco. It was still quite a loss, but not as disastrous as it would have been without the campaign. And we surely needed to do North America, as we needed to do North Korea; Laibach is on a diplomatic mission, remember, we like to visit unstable political systems and support people in trouble!

We also did a lot of shows in Europe in 2015; they were mostly great, the atmosphere was fantastic and Europe is still falling apart… Nevertheless, we are happy to see that not all of our old fans are dropping by the wayside, but that we are even gaining some new ones. It is not easy to be around for more than 35 years, because some old fans are already departing to the Master of the Universe, and new ones are not easy to find: young generation is too busy with social networking and does not care for music that much… We sincerely hope there will be some audience left for us in the coming year at all, having in mind the potential danger of doing and attending concerts given all the obstacles, new walls, concentration camps, and barbed-wire borders being created in Europe and around the world at this very moment.

One of the most important things that happened in 2015 was our Liberation Tour in North Korea. We were lucky enough to have the very rare opportunity to be the first foreign band (of a kind) to perform in that wonderful country (untouched by the modern dentistry)… Our stay in North Korea was interesting and pleasant. We received a warm welcome and the people were super nice (and this is absolutely true, even the censors were very kind). Due to technical reasons, we unfortunately had to cut short the second show (at the Pyongyang Music School), but we still somehow managed to do it, with a great deal of improvisation. There was a huge buzz about our North Korean visit in the media, but this video was probably one of the best comments we received (click to play video):

A concert in China did not follow; we had same problems in China as the Moranbong band (a North Korean girl band) recently had – neither the President nor the Prime Minister of China wanted to attend our concert, so we decided to cancel it (just like Moranbong did). Which is a pity, because we do not get the chance to play in Asia that often.

The Sound Of Music Tour

Finally, we would like to remind you that our Dylanesque ‘never-ending tour‘ around the world continues in January 2016 (we will see whose will last longer!) – click here to see the tour dates for „The Sound Of Music Tour”.  As a part of this tour, we will have a very special concert with the Slovenian RTV Symphonic Orchestra in Henry Le Boeuf Hall/Bozar in Bruxelles on the 9th of February; it is worth visiting, so don’t miss it!

All that is left now is to wish everyone ALL THE BEST IN THE COMING YEAR! And as a small token of our gratitude, we have decided to lower our prices (oh no, not again – Laibach is selling itself…!) at the WTC Shop by 15% so you can get the items that you have always thought you could not live without.

Have fun and stay alive and well in these difficult times, and hopefully we will see you in 2016!